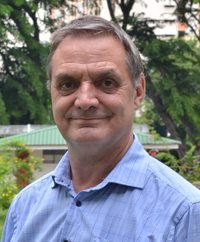 Before joining James Cook University Singapore Campus, Lawrence Smith spent several years teaching in China. He was a Senior Exams Officer and a teacher of EAP Mathematics at XJTLU in Suzhou and spent three years at the Centre for English Language Education at the University of Nottingham, Ningbo. Prior to working in China he worked with post graduate students for numerous years in Europe at the Centre for Economic Research and Graduate Education in Prague and at Central European University in Budapest; before this he was EAP coordinator at the International College of Economics and Finance in Moscow. While in Moscow he was also a Cambridge examiner and teacher trainer for the British Council. Lawrence began his academic career at Bilkent University in Ankara where he was a Testing Coordinator and Senior Teacher

The role of critical thinking and the importance of the literature review in research writing. Lawrence has given several conference presentation on both topics.

Smith, L.S.  (2006) Teaching the Literature Review: A Model for a More Coherent Approach. Third Conference of the European Association for the Teaching of Academic Writing Proceedings