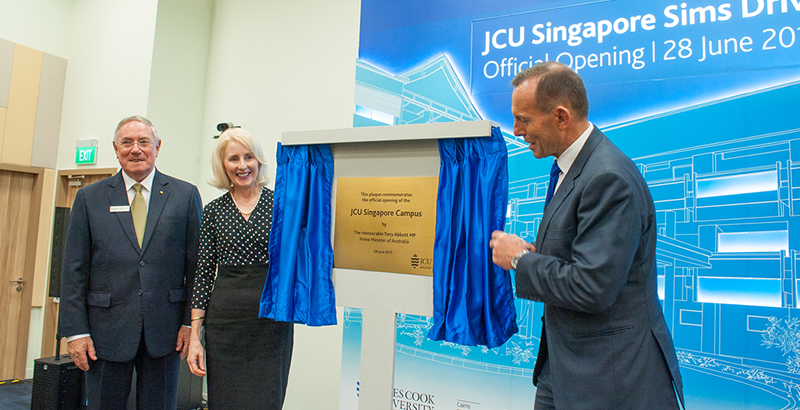 The Prime Minister was accompanied by The Hon Andrew Robb AO MP, Minister for Trade and Investment, and a delegation comprising of senior executives from major Australian corporations.

Conveniently located about 10 minutes from the Central Business District, the new JCU Singapore campus sits on 24,000 square metres of land. It has a gross floor area of 19,000 square metres, consists of over 40 modern classrooms and lecture halls, 10 computer and research laboratories, administration offices, a purpose-built electronic financial trading room, and a Psychology Clinic.

Dr Dale Anderson, Deputy Vice-Chancellor and Head of Singapore Campus said that the new campus will allow JCU Singapore to innovate and provide the best facilities for its multi-national student body.

“Having been part of the local education landscape since 2003, JCU Singapore is keen to provide a learning infrastructure that befits our status as the only EduTrust Star institution in Singapore,” Dr Anderson said.

“Every attempt was made to create a cutting-edge learning environment at this new campus, which will allow us to advance James Cook University’s intent to create a brighter future for life in the tropics,” he added.

JCU Vice Chancellor and President, Professor Sandra Harding said Singapore is a fantastic location for an Australian university that has been charged with pursuing education and research on issues of importance to the peoples of the Tropics.

“Internationally recognised as a university that has focused on conducting teaching and research related to the Tropics, we believe that it is appropriate for us to build upon our presence in Singapore to give better effect to our ambition to be one university in two countries in three tropical locations,” Professor Harding said.

The opening of the campus coincides with the first anniversary of the launch of the State of the Tropics report, which was led by James Cook University.

We believe Australia and Singapore have an important role to play as key economies located in the Tropics.”

“James Cook University decided to establish a presence in an advanced tropical location where the focus on expanding knowledge, innovation and scientific discoveries is aligned to the University’s intent to promote teaching and research that improves the lives of people living in the tropics,” Professor Harding added.

A wholly owned entity of James Cook University in the Australian state of Queensland, JCU Singapore moved to its new Sims Drive campus in February 2015.

JCU Singapore is the only education institution in Singapore to have attained the highly acclaimed EduTrust Star quality mark from the Council for Private Education (CPE).

The EduTrust Star is given to institutions that excel in all key areas of management and the provision of quality education services. This mark is also a symbol of recognition for sustained efforts in organisational improvement.