Highlights from the 5th Retro Inspired

Highlights from the 5th Retro Inspired

The event saw the creation of engaging games, and a fascinating lecture by Mike Pondsmith.

James Cook University in Singapore ushered in the 5th year of its annual Retro Inspired event over the weekend of 8-10 November 2019. The event comprised of a 24-hour Game Jam, a showcase of the games created, and a Public Lecture by Mike Pondsmith — the creator of the pen-and-paper Cyberpunk system.

110 students across 29 teams from 9 institutions took part in the 24-hour Game Jam. Each team was tasked with creating a game that illustrates the theme of “Humans, Cyborgs, Robots,” while incorporating retro-inspired elements into the game.

As the dust cleared after the day-long creation process, a public showcase of the video games that emerged was held on campus on Sunday morning 10 November. The games ranged from side-scrolling shooters and beat-‘em-ups to puzzlers to multiplayer experiences, and more.

Judging the games were an assortment of industry experts:

Members of the public were also invited to vote for their favourite game from the showcase, which contributed to the Audience Choice award. In the end, a competitive multiplayer 2D shooter clinched first place. Congratulations to all the winners!

An honourable mention to the other teams that made the top ten! 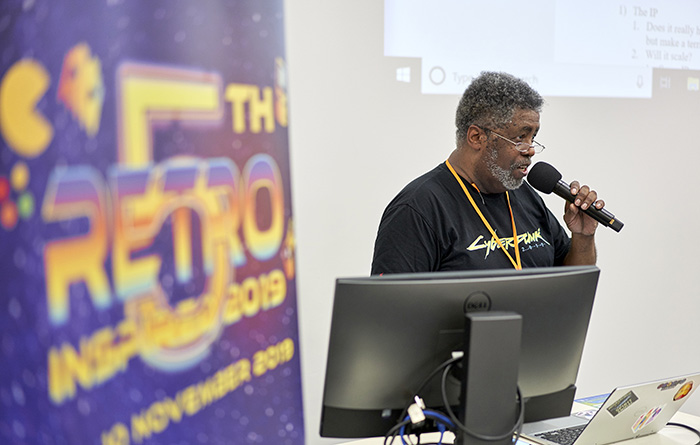 The afternoon also saw a Public Lecture conducted by Mike Pondsmith. Drawing upon his extensive experience in the industry, he spoke about the qualities of different mediums and their audiences, as well as the challenges of handling intellectual properties and adapting them to different forms of media.

Commenting on the event, he said, “I believe this year was arguably the most successful edition so far: not only did we have many participants and a very famous guest, but we also had more people coming over for the showcase and the lecture. The games were also quite impressive and several would have been worth a prize. I am already getting some ideas for making the 2020 edition even more exciting!”