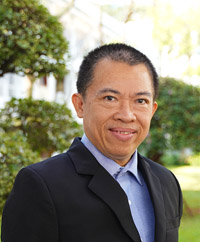 He has research experience across Australia, New Zealand, and Indonesia through which He has gained solid skills in both theoretical and practical knowledge in distributed wireless sensor networks and Internet of Things technologies. From 2009 to 2011, he was a Postdoctoral Research Fellow with Massey University, Palmerston North, New Zealand working in a Next Generation Networks research project supported by the Telecom New Zealand and He had been a Senior Lecturer with Computer Engineering Department, Dinamika University, Surabaya, Indonesia since 2011.

Dr. Jusak Jusak was a recipient of PhD research award from RMIT University. He received several national level research competitive grants from 2011 to 2020 and the best paper award in the International Conference on Information Technology Applications and Systems in 2018.

Dr. Jusak Jusak current research goal is directed towards designing IoT devices for monitoring, identification, interpretation, and securing signals from broad areas of disciplines with main focus in the implementation of IoT for tele-healthcare. Equally important, He will also focus on the identification of medical signals utilizing machine-learning methods such as the convolutional neural networks to provide a more accurate signal identification. In the near future, He is expecting to embed the main process including the signal recording and the signal identification in a small wearable device to create a smart handheld type tool.